BOOK NOW
Day 1-arrival in Bucharest
Arrival in Bucharest. Despite of being a crowded, busy city, Bucharest can be charming; mostly the old part of the city, with its historical buildings, the open-air village museum, parks and museums. Overnight in a cozy guesthouse dinner with your tour leader. 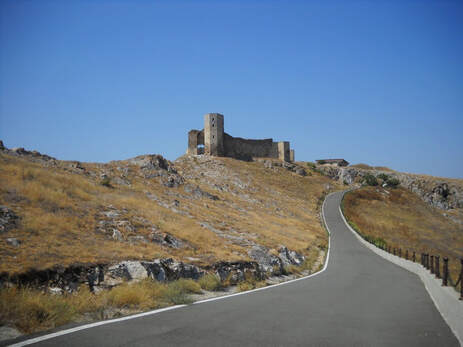 Day 2-Enisala fortress
Bucharest old city guided tour and after lunch, transfer in South-East of the country - Enisala village (3 h ½) , near Razim lake. Visit Enisala fortress and village museum, overnight in Safari Danube Delta Village, a holiday resort placed in an area with a great view, on an archeological field with Thracian remains, build with eco materials. Meals are based on local products and traditional receipts. 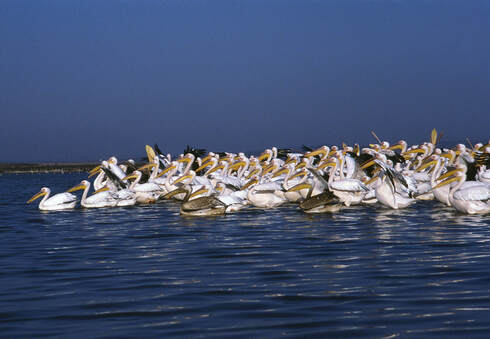 Day 3-Danube Delta
The journey continues through a landscape with fields, vineyards and wind turbines. Once in the village of Murighiol, the journey continues by boat. You are now passing into the vast Danube Delta. The boat takes you to the center of the delta, to the village of Crisan. Here you will stay for three nights. Crisan is situated in the middle of the Delta on the Sulina channel. It’s an old fishing village that now have a few hotels and guest houses. The famous canoeist Ivan Patzaichin, who won several Olympic gold medals, was born and raised here in Crisan. You will enjoy a beautiful sunset trip on a lake near the village. Back to Crisan where you are treated to delicious fish dishes for dinner.
There are about 15,000 people living in the delta, most of whom live on fishing. In addition to Romanians, there are a variety of minority people with roots in Ukraine, Bulgaria, Turkey and Greece. There is also a small group of Lippovans - “old-fashioned” Russians. 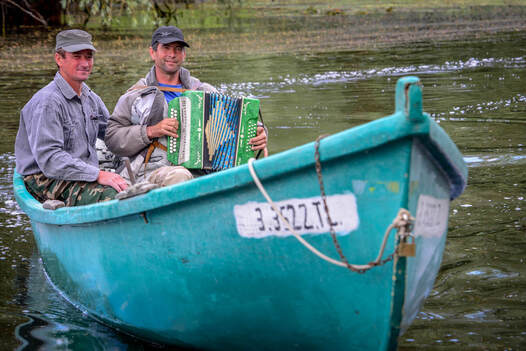 Day 4-Letea forest
You travel by boat via the village of Sulina where if the weather is good you can see where Danube flows into the Black Sea. During the boat trip, you get the opportunity to see colony of white pelicans, lots of different bird species as well as plants such as white and yellow water lilies. On the remote island of Letea you are invited on a tour past wild horses and old untouched oak forest. You will also learn more about what it is like to live in villages in the delta far from civilization. Late afternoon back to Crisan for a laid back evening. 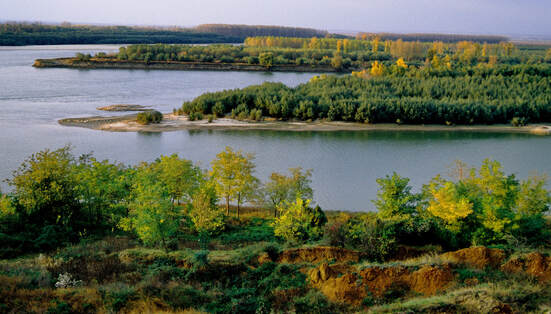 Day 5-Mila 23
After breakfast, you will visit the village of Mila 23. This is one of the most beautiful villages in the Delta. The locals are fishermen of different ethnic groups: Ukrainians, Russians, Turks and some Lipovan. You will enjoy lunch with the locals and after lunch you will go back to Crisan. In the afternoon you will paddle around in the delta’s narrow arms in a steady kayak and experience birds and vegetation up close. 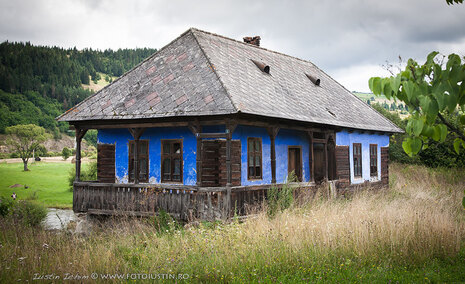 Day 6-from Danube Delta to the mainland
Last day of the delta. You will once again travel through the arms of the Delta back to the village of Murighiol. You will get transport to a smaller village where genuine accommodation awaits. In the afternoon visit Cocos monastery, meet the nuns and understand more of their lives. After that, a very interesting and inspiring visit to a traditional vineyard awaits, where all production is done with respect for the environment. The methods are the same that have been used for hundreds of years. Taste the natural wine and join an interesting tour of the vineyard. Late afternoon you will return to your accommodation in Somova.

Day 7-towards Moldavia
​By car north to Iasi. The city is the most important political, economic and cultural site in the province of Moldova as well as one of the oldest cities in Romania. Located in the northeastern part of the country, Iasi was for many centuries the crossroads of the main commercial roads connecting Poland, Hungary, Russia and Constantinople. Here, a short guided tour awaits in the afternoon. Free time in the city.

Day 8-Bucovina
​The journey continues through fantastic nature into the historic region of Bukovina. The area is located north of the Carpathians on the border with present-day Ukraine. The region is one of Romania’s most traditional and religious. Bukovina is famous for its beautiful nature and above all for its beautiful and well-preserved monasteries. Several of these monasteries are on the UNESCO World Heritage List and were built as early as the 14th and 15th centuries. The first stop is Suceava, the capital of Moldova in the years 1388-1565, which is considered to be the very gateway to Bukovina. Here awaits, among other things, a visit to the city’s large fort, which was built in the 14th century to withstand the advance of the threatening Ottoman Empire. Then the journey continues north for a visit to the Dragomirna Monastery. It is a special place, far from civilization. Our itinerary for today ends at Putna monastery - one of the most important cultural, religious and artistic centers established in medieval Moldavia, as with many others, it was built and dedicated by Stefan cel Mare (Stephen the Great) who ruled the Principality of Moldova during the years 1457- 1504. Today, Putna is also considered an important place of pilgrimage as Stefan the Great’s grave is located in the monastery. A few kilometers from the monastery there is another sacred place that you visit. It is a small house that the monk Daniil created in a cliff. Here he lived in isolation most of his life. 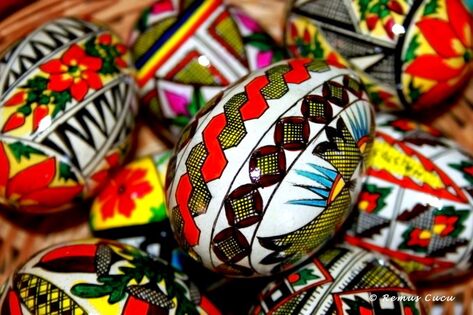 Day 9-Egg museum and steam locomotive
​On the way to Moldovita, there will be a visit to the charming village of Marginea where you will gain in-depth knowledge of how clay turns into art during a visit to a pottery workshop. Marginea is one of many villages in Bukovina where artisans passed on old knowledge from one generation to the next. The area is known for its black pottery and its ancient firing technique that has been used since the 16th century. After lunch it’s time to get on an old train that is still powered by a 100- year-old steam locomotive. The journey takes about an hour and ends in the village of Argel. From here transfer by car to the Condrea egg museum. Of all the ancient religious traditions in Bukovina, this is one of the most interesting. For hundreds of years, eggs have been painted for Easter around Bukovina. The old methods and tools have been inherited from generation to generation and even today there are masters who perform the work according to all the rules of art and exhibit their works of art around the world. The museum has over 11,000 eggs and some are over 100 years old. After an afternoon visit to the monastery in Sucevita, the day ends in Gura Humorului village, overnight in a nice hotel. 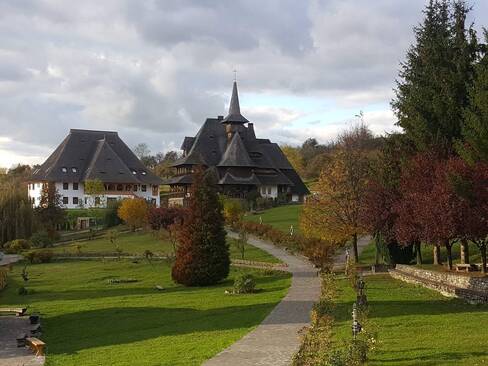 Day 10-Voronet monastery
The day begins with a visit to the Voronet Monastery, which along with many other painted monasteries and churches in Bukovina is protected by UNESCO. Voronet was built by Stefan the Great in the late 15th century and has the area’s most famous mural, the Doomsday Fresco. It is said to be a copy of the painting in the Sixstin chapel and spreads throughout the western wall. Admire the painting and the strong blue color called “Voronet blue”. You leave Bukovina behind and now travel into the Maramures region, located in northwestern Romania on the border with Ukraine. Like Bukovina, Maramures is a very religious and traditional part of Romania. Here, the villagers have taken care to preserve the villages’ old appearance and passed on knowledge and traditions from generation to generation. Visit the village of Cirlibaba-the wooden spoon museum, the painted village – Ciocanesti and Ieud. In the church of Ieud, the oldest in Maramures, the oldest preserved texts in Romanian have been found. Accommodation in Ieud, in a local guesthouse. 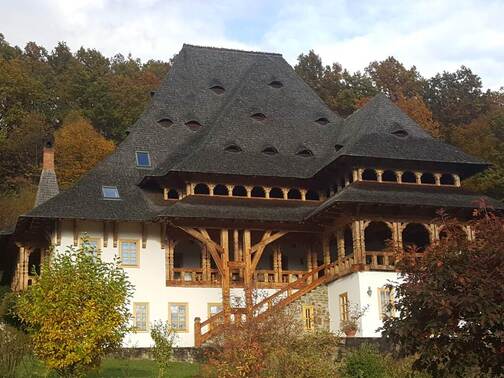 Day 11-Izei valley
Maramures are often referred to as the “land of wood” due to the stunning wood architecture found throughout the region. Many villages are still dominated by wooden churches, wooden houses and massive wooden gates, often adorned with skillful wood carving. The valley of Iza is a place detached as if from another world. Impressive landscapes, people who still wear traditional clothes, simple but cozy houses, old carved wooden gates - real prayers immortalized in wood, shingle roofs. You’ll have the opportunity to visit a weaver’s workshop and to see a still in use natural whirlpool into which carpets may be washed and drawn. In the afternoon you’ll go back to same hosts as yesterday for a tasty homemade dinner in Ileana guesthouse. 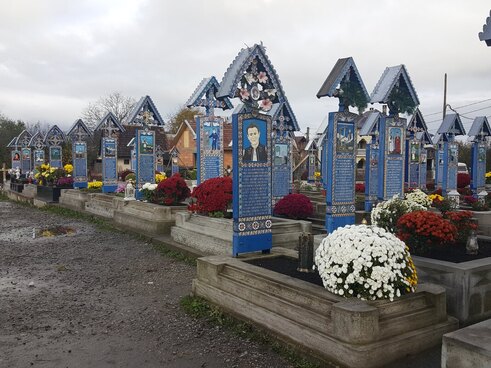 Day 12. Wooden houses and churches in Maramures
You'll continue the trip in the heart of Maramures, your itinerary goes today to Breb. In your way you’ll discover other small charming villages as Cosau, Sârbi, and the beautiful Bârsana monastery. Breb and the surrounding villages are some of the best preserved villages in Maramures. Here, most families have a small field of their own where they grow and many live in old wooden houses. The pace is slow and the hospitality great. By horse and carriage you travel through Breb and discover the surroundings. You walk through small charming villages in the area, visit families and take part in preserved knowledge and craft techniques. A local wood carver proudly shows off his skills and tells about how the work is done. In the afternoon, you discover the area on your own. Why not set off on a short hike over the adjacent hills. Dinner is taken in an old traditional wooden house in the village of Breb, Dochia’s house.
​ 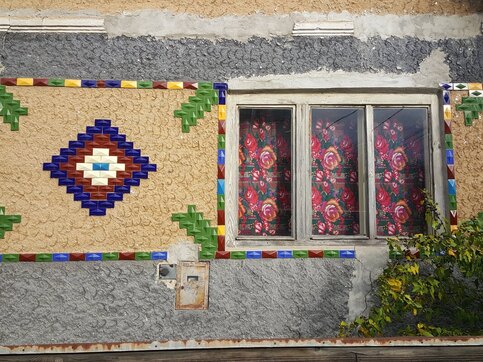 Day 13. Săpânța - the happy cemetery
Today you’ll visit Sighetu Marmatiei, located on the border with Ukraine. The city, also known as Sighet, is one of the most important cities in Maramures. The city is best known for being the place where many “class enemies” were deported during the years of communism. The once dreaded prison is now a museum, which you of course visit. The highlight of the day will probably be the visit to the “happy cemetery” Săpânța located at the monastery of Peri just outside Sighetu Marmatiei. The cemetery is completely unique as it is dominated by tall wooden crosses in oak placed at each grave. The wooden crosses are beautifully decorated crafts with carved images from the deceased’s life. There is also an engraved text on each wooden cross that describes the deceased person in an ingenious way. Both the good sides and the person’s shortcomings are addressed. Transfer back to your host in Breb village.
​ 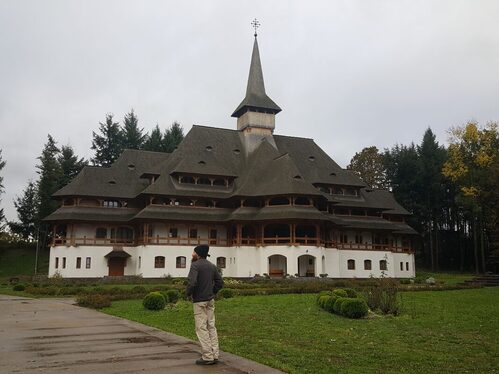 Day 14. Visit Baia Mare and Cluj-Napoca
After breakfast transfer to Baia-Mare. The city was certified in a document in 1329 and developed as a gold mining center in the 14th-15th centuries. In 1446 the city became the property of Iancu de Hunedoara's family. In 1469, during the reign of the Hungarian king Matthias Corvinus, the city was fortified. In 2015, Baia Mare entered in the final competition for the title of European Capital of Culture 2021, along with Timișoara (winning city), Bucharest and Cluj-Napoca. Then the journey continues to Cluj-Napoca, the capital of Transylvania and the country’s second largest city. Free time for exploring until dinner time. Accommodation in Hanul Fullton. In the evening there is a last dinner with the group. ​ 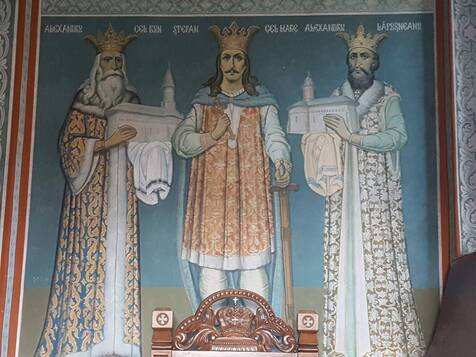 Day 15. The journey ends in Cluj-Napoca
The trip ends in Cluj-Napoca on day 15. If you have time, we recommend that you extend your trip by a few more days in Transylvania.
​
Price for 6 person group, 1550 euro/person. This price includes: half-board accommodation + picnic lunch, guided tour, transfer between days, luggage transfer, transfer from airport and back.​